The end of the Carnival in “Grecia Salentina”: “the death of Paulinu” Tuesday March 5, 2019 in Martignano 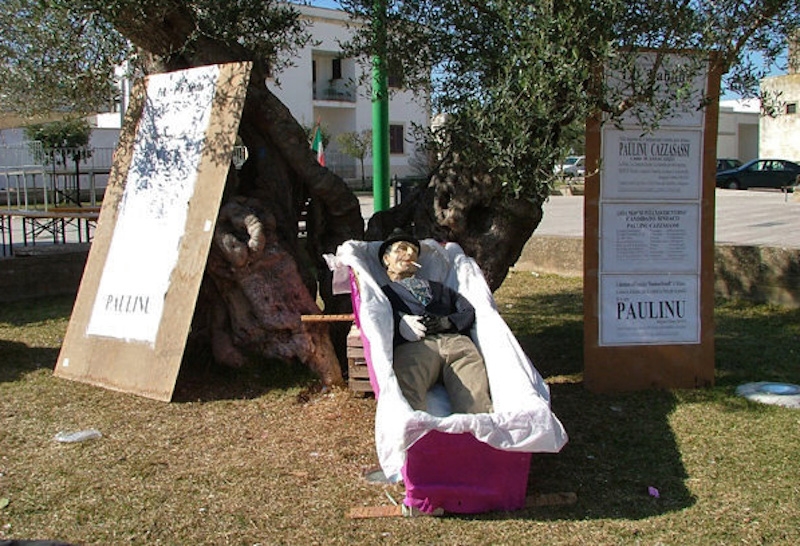 Posted by chiccorizzo on 4 March 2019 | Featured

Carnival is the time of colors and joy of living. It is the period of the year when everything is permitted … and the game, the joke and the fiction become a rule.
However, the Carnival of “ Grecia Salentina” re-proposes ancient atmospheres of Roman and medieval feasts. In this period of the year the people at lowest social-order could have playful invective against powerful men without consequences. Everyone is sure that “overturned power” will stop at the end of the Carnival and the social order will return as before. This “overturned power” is symbolically represented in Salento by a straw-puppet that will be burned at the end.
Thus, every year the Carnival period close with “the death of Paulinu” in Martignano, a nice village in the province of Lecce.
It is a theatrical representation of a grotesque funeral of a straw-puppet that takes place round the streets and the main square of this village.
After being greeted joyously with songs and cackling, the straw-puppet called “Paulinu Cazzasassi” attends his funeral rite and listens to the cries and lamentations of his wife Nina Sconza and other characters of the Martignano community. The “chiangimorti” alternate cries with stories that make fun of local characters. Everything is under the sign of hilarity and improvisation.
The straw-puppet is carried on a pushcart around the streets of the village accompanied by a band and the “chiangimorti”. After its arrived in the main square of the village, a traditional banquet (or “consulu”) based on tripe soup, potatoes and wine is offered to the widow Nina and to all those who suffer from the loss of Paulinu. The music enliven the feast and everyone can taste wine and typical local products.
At the end of day the straw-puppet will be burned. Thus the happy revolt ends and also the revelry and wildness stop. The Lent starts.
In reality “The death of Paulinu” represents the essence of Carnival – which etymologically derives from Latin “carnem levare” – and marks the transition from the opulence period to the Lent.
After “the death of Paulinu” in the main square of Martignano another straw-puppet is shown as symbol of the beginning of Lent: the “Quaremma”. Thus the profane meets the sacred.